Mayor Martin Walsh and Governor Charles Baker announced a joint venture to develop a state-owned piece of land near South Station yesterday, according to Massachusetts Department of Transportation press release.

The parcel includes 5.5 acres and is bound by Kneeland Street, Albany Street, Atlantic Avenue and the South Station Connector. Veolia Energy operates a steam plant and there’s an office building owned by the state as well.

According to the press release, the Veolia plant would be reduced in size and the state offices moved or redeveloped.

It’s certainly a good place for transit-oriented development, but that might not neccesarrily translate into car-free development, despite being in one of the most car-free areas of Boston, since the area is a little lacking in non-specialty grocery stores.

Transportation Secretary Stephanie Pollack said that the development would hopefully generate revenue for MassDoT that could be invested in the transportation system.

A Request for Proposals has not been issued, but public meetings will be held to determine what should be there, beginning in March.

The City and the state partnered with developer Related Beal and were able to put together a mixed-use, 239-unit building near North Station. Uniquely, all 239 units are affordable or middle income. To do it, they were able to use state tax credits and low-interest state financing. More importantly, the state owned the parcel, 1b, which was left over from the Central Arterty.

According to Related Beal, the project will be 14 stories and include a 220 room hotel in addition to the residential units. 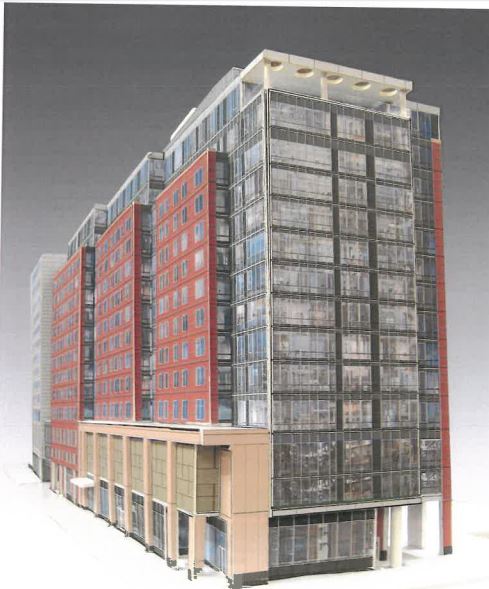 A rendering of the Parcel 1B project, from the Boston Redevelopment Authority.

Something similar, though possibly with more office than hotel, could be a good fit down by South Station.

One thought on “City, state collaborate on development”