Yesterday a group of City of Boston and Massachusetts Bay Transportation Authority officials told the Boston City Council about their efforts to bring transit signal priority to Boston. The hearing was chaired by Councilor Sal LaMattina, but was held through the efforts of Council president Michelle Wu.

“For me, the question boils down to what . . . the City can do to make our public transit as good as possible,” she said. “What can we be doing?”

“This is a great way of speeding up Boston residents getting to work,” said Councilor Andrea Campbell.

Transit signal priority is what it sounds like: traffic signals are adjusted as needed or timed to keep buses and at-grade rail service like the Green Line running over having them wait at the lights while cars are allowed to go.

Chris Osgood, the Chief of Streets of the City of Boston, said Go Boston 2030 surveys showed that more reliable transit is a high priority for Boston’s citizens.

She compared transit signal priority to resident parking permits and said that they have to maintain access for pedestrian and drivers going across the prioritized street.

“Currently the BTD is working with the MBTA to prioritize traffic signals for the Silver Line and Green Line,” Fiandaca said.

Melissa Dullea, the Senior Director of Service Planning for the MBTA, said TSP was employed at 12 locations right now — eight for the Silver Line and four for the 57 bus route from Kenmore Square to Watertown Yard. She said that the process for the 57 involved hiring consultants and making sure there wasn’t an undue impact on automobile traffic.

Right now they aren’t looking at expanding TSP, but she said it could be done because the City has put the infrastructure in place.

Scott Hamwey, manager of long-term planning at the Massachusetts Department of Transportation, said that they wanted to work on making the Silver Line more like the bus rapid transit it was supposed to be. He said that they want to identify roadway segments with high usage as candidates for dedicated bus lanes. As an example he pointed to Washington Street between Roslindale Village and Forest Hills, where there are a lot of bus routes and consequently the corridor moves a lot of bus passengers even though none of the routes is high ridership on its own.

“It’s a balancing act to manage all users of our roadways,” said Fiandaca.

“We need to do [TSP] is a manner that makes sure we’re not detering other traffic,” said Don Burgess of the Traffic Management Center.

David Block-Schachter, the MBTA’s chief of technology, said that the T was also looking into ways to do more off-board fare collection and all-door boarding to reduce time spent in bus stops.

Marc Ebuña, a co-founder of TransitMatters, testified that activists are concerned about the City and the MBTA pointing fingers at each other over why it’s not getting done and they want to see someone take ownership of TSP. 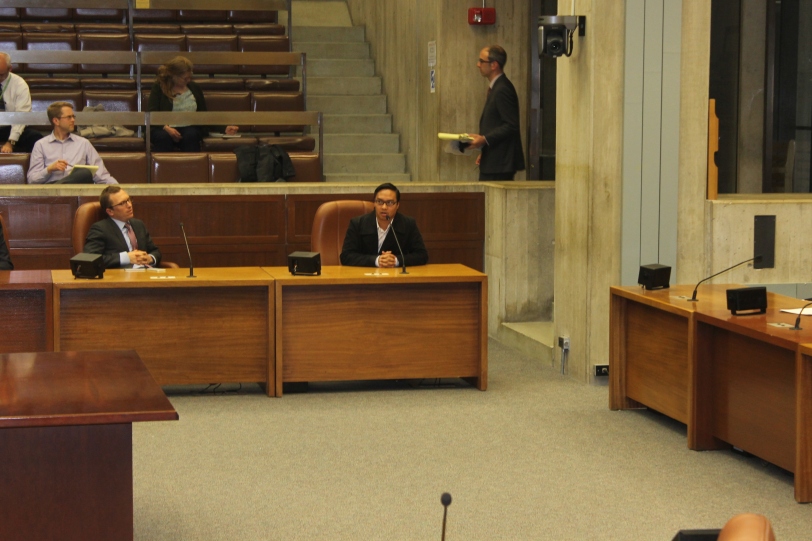 Other communities are being more pro-active with transit signal priority. Last year, citizens of Cambridge voted to fund TSP along the route of the 1 bus on Massachusetts Avenue, as part of their participatory budget voting.

Osgood said that BTD would be open to collaborating with Cambridge on TSP for the 1’s route in Boston, but John DeBenedictis, an engineer with BTD said he hadn’t heard anything about the 1. He said that TSP was feasible on its route, but because it intersected the Silver Line’s route on Washington Street, adjustments would have to be made.

“We’re going to keep it in committee,” Wu said. “I’d love to do some working sessions and get into next steps.”

A disconnect between activists and officials was manifest, however.

Burgess said that the system the City has been working on was to help buses stay on their schedules and so they only get signal priority when they’re running late.

By contrast, people like Ari Ofsevit want a system that is across the board better. According to Ofsevit, reducing a light at D Street in South Boston from 100 seconds to 20 seconds would save the Silver Line 2,671.5 hours a year. This is different from merely waving it through when its running late.