Yesterday A Better City, an association of businesses in Greater Boston, released its first ever State of the Built Environment report, examining the current and projected growth in the demands on the region’s infrastructure through 2030. The report is conservative, assuming that existing mode-share percentages will remain constant, along with existing per household or per business energy, water and sewage consumption (i.e. there will be no concerted effort at conservation).

According to the report, the region’s population is expected to rise by nearly 500,000 people by 2030, creating greater demand on roads, sewers, electricity generation, land use and transit. In addition to examining demand, the report also looks at sustainability. The executive summary notes that the Boston region will experience more severe weather as a result of climate change and that “Climate scientists predict that Boston will be among the US cities hardest hit by rising sea levels and storm surge.”

While the report makes good points about the state of roads and bridges in Massachusetts, its analysis of traffic falls into the same pitfalls as WBUR’s car-centric examination of traffic congestion: it measures congestion purely in terms of vehicle speeds. 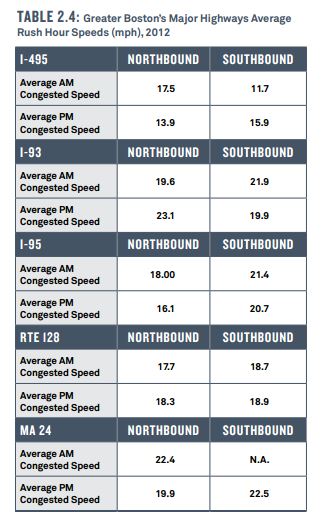 As pointed out in the WBUR article, the problem with such a measure is that it ignores how many people are being moved. Automobiles are incredibly bad at moving large numbers of people around. Furthermore, we know from the law of induced demand that roadway speeds cannot be signifigantly improved from new road construction. We also know that increased roadway speeds would result in increased fatalities and that there would also be a corresponding increase in greenhouse gas emissions.

According to the report’s projections — based on no mode shift, remember — by 2030 there will be an increase in car commuters of 51.6 percent in the inner core of Boston and an increase of 60.2 percent across all of Greater Boston. 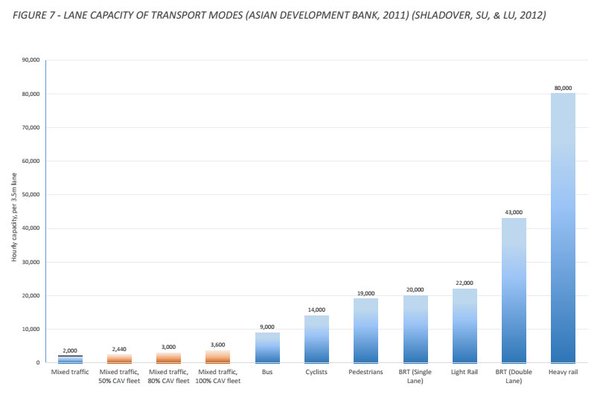 A chart showing lane capacities of different transportation systems measured in passengers per hour. From Urban Data on Twitter.

Currently the region produces over 500 million gallons of sewage a day and consumes 325.8 gallons of water a day.

An increase in trash needing to be processed of 12.6 percent is also expected, along with a demand for 17.4 percent more electricity and 14.3 percent more natural gas.

The report offers no firm conclusions, only asks more questions, but it’s clear that in the future Greater Boston cannot continue like it has. Its land use and transportation policies are already clearly unsustainable. If anything, the report understates the problem. The percentage of the population 65 and over is expected to increase 76.8 percent — including 97 percent in the suburbs and 81 percent in the regional urban centers. While this means a reduction in the number of daily commuters, it otherwise represents a massive planning conundrum of its own.

Older people cannot get around easily, they cannot drive as well and they will be on fixed incomes. A car-centric suburb is the worst possible place to grow old, but many Massachusetts residents are going to be doing just that. Social isolation and traffic fatalities are already an issue in Boston’s West Roxbury neighborhood, as is the fact that their houses were built for families with a lot of children and are often on two stories. They have stairs that need to be climbed, unused rooms that are heated and driveways that need to be cleared.

The benefits of compact, walkable, transit-friendly design cannot be overstated. A pattern of development like that which guided Boston from its foundation until World War Two can help the region to reduce its dependence on cars, reduce its greenhouse gas emissions, reduce its wastewater impact, electricity consumption and overall infrastructure wear.

If the answer to the challenges raised by this report is to simply build more of the same — more highways, more parking lots, more subdivisions — then we will not only have failed to grasp the nature of the problem we will have squandered our advantages and our weath.

We need to build better and smarter and not rely on the Infrastructure Cult.