Bringing housing back to Central Square

A petition to liberalize the zoning in Cambridge’s Central Square was presented to the Cambridge Planning Board Tuesday night. Sponsored by Middle East Nightclub and Restaurant owner Nabil Sater, the petition attracted the support of 119 residents and was also supported by A Better Cambridge.

The goal is to amend the city’s zoning code in Central Square to allow for greater density, more housing and greater height. According to the text of the petition, many buildings in the neighborhood were once taller, but had their owners had the upper stories dismantled during the Great Depression in order to reduce the property tax burden.

This photograph, from the Cambridge Historical Society, shows the Asa Morse building on Massachusetts Avenue in 1907, left, and 2010, right. The building to its right, at four stories in 1907, had also been replaced with a two story building by 2010.

According to the petition, “Central Square is a shadow of the commercial hub it once was . . . the zoning recommendations herein aim to increase the potential for housing, expoand the local retail footprint, enliven side streets and activate the streetscape.”

The changes proposed in the petition include allowing floor area ratios of up to four for residential buildings in the business district, exempting residential balconies, rooftop spaces and retail spaces of up to 1500 square feet from FAR calculations, prohibit banks from taking up more than 25 feet of street frontage and require chain businesses to get special permits. The petition also proposed changing parking minimums to maximums and waiving parking requirements in exchange for contributions to a Central Square Improvement Fund that would use the money to improve parks, restore historic buildings or monuments, improve pedestrian or cycling infrastructure and fund events.

According to Jesse Kanson-Benanav, the Planning Board voted unanimously to recommend the city council adopt the petition. 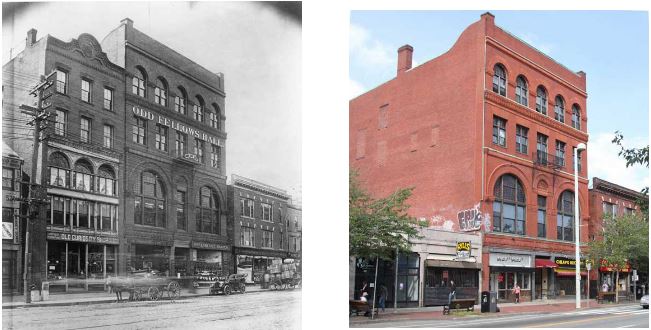 Another photograph from the CHS, showing how the building next to the Odd Fellows Hall (now the Dance Complex) was reduced from five to one stories between 1910 and 2010.

The petition only applies to the Central Square Overlay District, which is broadly everything within two blocks of Massachusetts Avenue between the YMCA and Cambridge Bicycle.

Although confined to Central Square, it is to be hoped that the ill-defined stretch of Massachusetts Avenue between Central Square and Harvard Square will get some attention in the near future. It’s not a long walk, but activity peters out and it can be boring. It can also be easy to overlook stores and restaurants because there’s little to encourage walking. People go to Central or they go to Harvard, they don’t go to the gray area in between.