Suffolk Downs plans are a slap in the face

HYM Investments vpurchased Suffolk Downs, 160 acres of essentially open space, for $155 million. It’s the largest undeveloped parcel in the City and is served by two stops on the MBTA’s Blue Line: Suffolk Downs and Beachmont. On May 26 The Globe reported that HYM closed on the deal and revealed the developer’s plans. In a word, they stink.

Jon Chesto and Tim Logan reported that HYM managing director Tom O’Brien wants to put apartments, shops and offices on pedestrian-friendly blocks. Then they said this: “He has few specifics just yet, but points to the succesful Assembly Row complex in Somerville as an example of the kind of project he has in mind for Suffolk Downs.”

Ugh. This shouldn’t be hard and it isn’t.

Assembly Row, or Assembly Square, or whatever it’s called these days is a hideous example of cargo cult urbanism. Supposedly designed on New Urbanist principles (and earning Somerville mayor Joe Curtatone an award from the Congress for the New Urbanism New England chapter), the only nearly succesful thing about it is the architecture, which is just okay.

The streets are all at least 100 feet from building to building and have queing lanes and sweeping curbs. The huge streets don’t even have bike lanes! And parking. There’s a lot of free onstreet parking, as well as an awful lot of free garage parking. In fact, the dominant structure type is parking garage. There appears to be about eight parking garages for every store and apartment.

Now, the interesting think about Assembly Row is that part of building it involved an infill station on the Orange Line, Assembly. The idea being that people would take the T to get there and go other places. But with all of that free parking why would anyone want to take the T? Well, they don’t: Assembly, which opened three years ago, has the least passengers on the entire Orange Line. Only a few Blue Line stations and Green Line stations have a lower ridership system-wide.

And it surely doesn’t help that if you do take the T to Assembly, you are greeted with a) a bunch of parking garages b) a construction site and c) a bunch of roads with closed sidewalks and detritus and other nastiness that makes you wonder if that the station is really open. 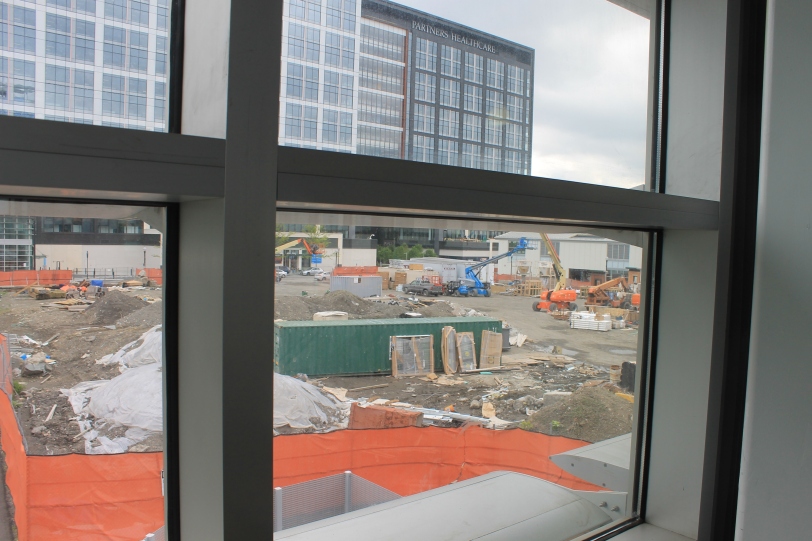 What an inviting view! Looks great for walking.

Here’s an idea: if you don’t build parking, especially oodles of free parking, people would be more inclined to get there by transit. Newbury Street: not a lot of parking, plenty of people walking, biking and taking transit. Downtown Boston: parking is scarce and expensive, lots of crowded trains. North End: not only is there not a lot of parking, but the streets are narrow. Everybody walks

The North End is how Suffolk Downs should be redeveloped. No parking, high lot coverage, narrow streets. Actually urban instead of the “Ye olde towne centre” fakery of Assembly Square. They could even platt it out into small lots of 20 feet by 40 feet and sell them to small developers. A North End-style development could provide 40,000 homes and not add more than a handful of cars. The 143 acres of Assembly Square, on the other hand, will be home to just 3500 people, according to Curbed. And about 120,000 automobiles by the looks of things.

This is the North End.

This is Assembly Square.

This isn’t difficult at all. Building more housing is always good, but building more dangerous streets, more vast parking garages, more places that just recapitualate the worst failures of 20th century urban planning is a slap in the face to everyone who wants the city to succeed and be a place for people, not a car storage facility with a juice bar on the corner.